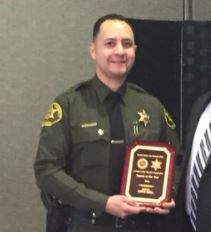 Edwin Morales Mora, 45, was indicted on August 5, 2020 by a grand jury on one felony count of filing a false police report.

On August 30, 2017, Mora, while employed as an Orange County Sheriff’s deputy, knowingly wrote and filed a false police report that stated he booked a knife, methamphetamine, and a glass smoking pipe into the Sheriff’s evidence locker in Santa Ana. He never booked the evidence.

Mora is no longer employed by the Orange County Sheriff’s Department.

Joseph Anthony Atkinson, Jr., 39, and Bryce Richmond Simpson, 31, each pleaded guilty on June 5, 2020 to one misdemeanor count of willful omission to perform their official duty. Atkinson and Simpson were both sentenced to one year informal probation.

Upon learning of the full extent of the audits, District Attorney Spitzer immediately requested additional information from the Sheriff’s Department about potentially impacted criminal cases to ensure that the District Attorney’s Office was able to “identify any and all cases handled by the OCDA where a defendant’s due process rights may have been negatively impacted by having evidence collected but not booked.”

District Attorney Spitzer also directed two senior prosecutors to oversee the office’s response. Because of the deficiencies in the Sheriff’s audit, District Attorney Spitzer ordered a hand-search of all cases resulting in a conviction over a three-year period – from March 2015 to March 2018 – to determine if there were cases where evidence was collected but not booked.

A total of 22,289 cases were reviewed by a joint team of OCSD and DA investigators

The OCDA reports on the Sheriff’s Department Evidence Booking Issues can be found here.

In 2020, District Attorney Spitzer re-opened the criminal investigation of Simpson, Atkinson, Mora and the 14 other Orange County Sheriff’s deputies accused of not properly booking evidence after personally reviewing each file himself. Sixteen of the deputies have been added to the District Attorney’s Brady Notification System. Brady v. Maryland requires prosecutors to disclose to the defense any material exculpatory evidence, including evidence that could be used to impeach police witnesses.

As a result of the additional review, the District Attorney’s Office hired veteran prosecutor Patrick K. O’Toole as a special prosecutor to review the 17 cases and determine if criminal charges were warranted. O’Toole served as the United States Attorney of the Southern District of California and as the head of the San Diego District Attorney’s Public Integrity Division.

“The public has an absolute expectation that their law enforcement officers will carry out their duties lawfully and truthfully,” said Orange County District Attorney Todd Spitzer. “When law enforcement officers falsify reports and break the law, it deprives defendants and victims of their constitutional rights, jeopardizes the criminal justice system, and erodes the public trust. As soon as I was made aware of this situation, I immediately took action to ensure the rights of victims and defendants were safeguarded and to hold those who violated the law accountable.”