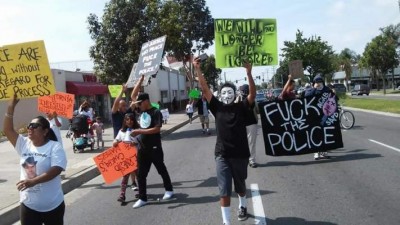 Anti-police protesters took over a span of First Street, in Santa Ana today, to protest the recent police shooting of Ernesto Javier Canepa Diaz, a man who  was accused of robbing a 63-year-old Latina grandmother on Feb. 13 while she was loading her grandchildren into a car in the 2300 block of N. Louise St.

Taking over a public street without a parade permit is illegal and poses a danger to the drivers and the protesters.

Anti-police protesters in Los Angeles have been taking over streets and freeways for months.

Today’s protesters are the same crowd that previously took over a Santa Ana City Council meeting.  Those actions led to new security policies including the use of metal detectectors.

UPDATE: Santa Ana Copwatch has posted on Facebook a much longer explanation of what they were trying to accomplish this weekend:

Copwatch Santa Ana just finished up a busy and exciting weekend. On Friday night, we set up on 5th and Fairview to defend our community against a police checkpoint. The next day, we helped host a movie night at Memorial Park where we enjoyed Ñ Don’t Stop’s documentary The Mike Brown Rebellion. And just earlier today, we took to the streets and shut down areas of Santa Ana with the family of Ernesto Canepa (murdered by SAPD on February 27). 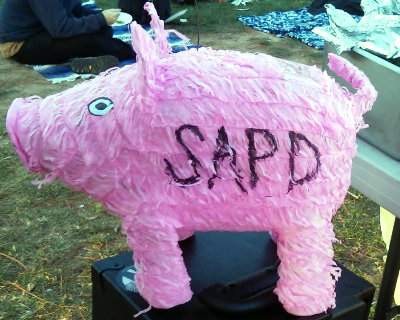 We want to thank everyone who came out and made the movie night happen, it wouldnt have been possible without your direct participación. We enjoyed everyone’s company. Special thanks and shout out to Chicanos Unidos, InLeague Press, and ‪#‎BlackLivesMatter‬ ‪#‎LB‬ Long Beach for cruisin out n helping host, we look forward to continue connecting and building solidarity. There was a tense moment when the pigs came rolling up into the park n onto the grass, pointed their lights at our gathering, and threatened to shut us down before the movie played but peoples remained composed, stood together, held their ground, and ran the pigs outta the park. We didn’t need their permission or permits to watch a documentary in our neighborhood. It showed that when the people stick together against the state, anything is possible. We can take down our oppressors and create a better world without them. It was also really fun taking turns hitting SAPD Officers Berwanger and Shynn (our pig piñatas). The kids really enjoyed it.

Today peoples shut down parts of Santa Ana by taking the streets, blocking traffic and turnin da f*ck up. As long as this white supremacist capitalist patriarchal system exists and keeps claiming more lives, we cannot go about business as usual. We want to commend the fearless and courageous family of Ernesto Canepa for leading this march. It was a march organized straight from the people, a democratic grassroots effort. Of course the loser politicians who write the laws weren’t going to show up. There was also no sign of the non profit industrial complex or any 9-to-5 career activists whose work usually involves derailing, pacifying, and managing movements. They were probably caught up at city council, getting awards from Pulido.

We remember Ernesto Canepa, Monique Deckard, and all the victims of state violence whether it’s in California, Missouri, New York, or Guerrero. RIP. And of course…FTP heart emoticon

A quote from brotha Huey:

“In America, black people are treated very much as Vietnamese people or any other colonized people because we’re used, we’re brutalized. The police in our community occupy our area – our community – as a foreign troop occupies territory. And the police are not there […] to promote our welfare or for our security and our safety, but they are there to contain us, to brutalize us, and murder us because they have their orders to do so. Just as the soldiers in Vietnam have their orders to destroy the Vietnamese people. The police in our community couldn’t possibly be there to protect our property because we own no property. They couldn’t possibly be there to see that we receive the due process of law for the simple reason that the police themselves deny us the due process of law. And so it’s very apparent that the police are only in our community not for our security, but the security of the business owners in the community and also to see that the status quo is kept intact.”