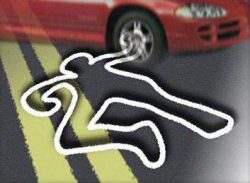 Officers from the Santa Ana Police Department along with the Orange County Fire Authority responded to the scene where the pedestrian was declared deceased.

Based upon the preliminary investigation, it is believed that the male was in the southbound lanes of 2600 S. Bristol when a vehicle traveling south on Bristol struck him. The vehicle involved in this collision remained at the scene and the driver was cooperative. The pedestrian may have been struck by a second vehicle but that remains under investigation along with the cause. Alcohol is not believed to have played a role in this collision.