“Good Jobs Now Rally” Tell Bank of America and Chase to PAY UP! 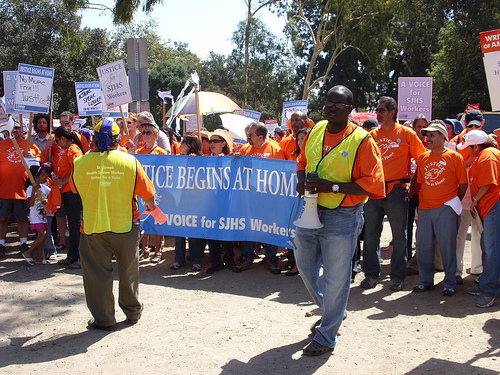 “Good Jobs Now Rally”  Tell Bank of America and Chase to PAY UP!

What: The reckless greed of big Wall Street banks such as Bank of America and JP Morgan Chase helped wreck the American economy and kill American jobs. While working families lost jobs, homes, retirement savings and hope, Wall Street took $700
billion in taxpayer bailouts and went right back to business as usual. They choked up credit, handed about $145 billion in pay and bonuses to their executives who tanked our economy and hired an army of lobbyists to fight financial reform. Our nation is 11 million jobs in the hole. Hard working Americans are angry, frustrated and fed up! We need good jobs now. It’s time to make the big Wall Street banks pay.

Where: In front of Bank of America at 1418 N. Main Street, Santa Ana, CA and ending at CHASE on Main and Washington