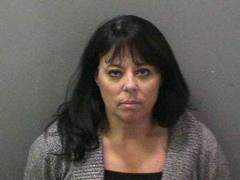 SANTA ANA – A 45-year-old woman was sentenced today to six years in state prison and lifetime sex offender registration for having sex with a 12-year-old boy who was friends with her son. Patricia Ann Serrano, 45, Fountain Valley, pleaded guilty Jan. 6, 2014, to three felony counts of lewd acts on a child under 14 with the sentencing enhancement for substantial sexual conduct with a child. In a separate, related case, the defendant pleaded guilty Jan. 6, 2014, to one felony count of forgery and one misdemeanor count of attempted petty theft and was sentenced today to two years in state prison, to be served concurrent to the six year sexual assault sentence.

Serrano knew 12-year-old John Doe through his friendship with her son. On two occasions in October 2011, the defendant had unlawful sex with the 12-year-old boy in her home and in a car. The defendant also sent sexual text messages to the victim.

On one occasion, the defendant was in a locked room with John Doe. The victim’s mother discovered them and, while she did not observe any sexual contact, she became suspicious of Serrano’s relationship with her son and reported it to the police.

During the pendency of the sexual assault case, Serrano was charged for committing a new, related crime.

On Dec. 30, 2012, the defendant drafted a false legal letter on fake Orange County District Attorney (OCDA) stationary and forged the name of the deputy district attorney (DDA) prosecuting her criminal case. The forged letter, in which Serrano misspelled the DDA’s forged name, was provided by Serrano to her employer as evidence that she had been in court on a date that she had failed to appear at work. The defendant attempted to fraudulently receive payment from her employer for the missed day of work. Serrano’s employer determined that the letter was forged and contacted the OCDA.

At the time of the defendant’s guilty plea, the victim’s mother gave a statement to the court describing the impact of the crime on her son and their family.