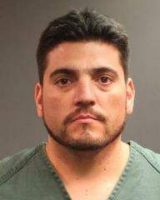 Plascencia and Salgado are accused of driving Jane Doe to various locations including a gas station and two empty parking lots. They are accused of raping the victim multiple times in each parking lot. The defendants later released the victim, who reported the assault to the Santa Ana Police Department (SAPD). SAPD investigated this case but were not able to locate the suspects despite diligent efforts.

In early 2016, SAPD reopened the case and submitted DNA evidence from Jane Doe’s assailants to the Orange County Crime Lab (OCCL) for testing. One of the DNA profiles found on the victim’s body matched defendant Salgado.

In February 2016, the Orange County District Attorney’s Office (OCDA) Sexual Assault Unit began working with SAPD on this case. On Sept. 15, 2016, the defendant was charged with multiple felony kidnapping and forcible rape counts.

On Oct. 5, 2016, Salgado was arrested on a warrant by the Federal Bureau of Investigation (FBI) Violent Crimes Fugitive Task Force in Chicago and subsequently extradited from Illinois to Orange County.

During the course of their investigation, SAPD identified Plascencia as the potential additional suspect. DNA evidence collected by investigators linked him to the crime, and Plascencia was charged on Nov. 2, 2016, with the counts listed above and a warrant was issued for his arrest.

On Nov. 6, 2016, Plascencia was arrested at a border crossing in Nogales, Ariz., and SAPD detectives extradited the defendant from Arizona to Orange County on Nov. 15, 2016.

Jane Doe was able to identify both defendants in photo lineups 17 years after the crime.

The OCDA Sexual Assault Unit handles cold hit DNA cases from the investigative stage once the notification has been received from the California Department of Justice. The OCDA works closely with police agencies and OCCL to review cases that are often aged, locate victims and witnesses, and determine whether the cold hit solved the case. The Sexual Assault Unit has worked hundreds of these cases and successfully prosecuted or eliminated suspects.

The OCDA Special Prosecutions Unit and SAPD pursued the defendants’ extradition so they could be transported to Orange County to face their charges.

The Special Prosecutions Unit is dedicated to the apprehension and extradition of our most serious, violent, and dangerous fugitives from anywhere in the world. The majority of extradition cases involve homicide, sexual assault, gangs, major fraud, and child abduction. OCDA partners with local law enforcement, as well as Interpol, the FBI, US Marshals, State Department, Department of Justice, and Homeland Security, in a continuous effort to prosecute fugitives, protect the public, and seek justice for victims. We would like to thank our law enforcement partners in Illinois and Arizona for their assistance in this case.

« The SAPD arrested a man after he fled in a stolen car and slammed into a police car
The O.C. Sheriff is looking for two suspects who have been writing bad check to buy cars from private sellers »