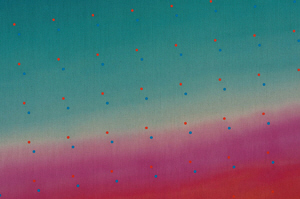 September 2012, Santa Ana – Grand Central Art Center presents Tony de los Reyes: Border Theory, the debut of the artist’s new series of rigorous, visually tactile paintings that contemplate abstraction as the foundation of both color field painting and the establishment of the US-Mexico border. In works that are both optically vivid as well as quietly provocative, Border Theory posits that the inclinations behind border-making and the aesthetic principles of abstraction are powered by the same habitual pursuit of spatial order.

Both abstract painting and border-making rely on the assumption that absolute space (the “free” space of the canvas or landscape, unresolved and contested), can be materialized through its transformation into a space of containment and law (the “painting”, the “nation”). The relationship of a contemporary artist to his or her space (in this case de los Reyes to Los Angeles), is also the story of a space and its connection to the past (Los Angeles to Mexico) and occupation (artist to painting). In the Border Theory paintings, de los Reyes pursues the amorphous, layered structures of identity as found in the continuum of his location and profession.

On February 2, 1848, the Treaty of Guadalupe Hidalgo brought an official end to the Mexican-American War, establishing a3,169 km line that is the most traversed and perhaps controversial border in the world. It is a site of abstraction: political, cultural, economic, and aesthetic. Physically, it alternates between the geometric and geologic; extrapolating the axial co-dependence of “landscape” and “border.” This relationship, which defines border-making and consequentially identity formation, also happens to be the most significant preoccupation of abstract painting. The Border Theory paintings compress these parallel issues of spatialization.

The “depictions” found in the Border Theory paintings come directly from sections of the US-Mexican border captured by satellite photography. From such altitudes, regional landscapes are flattened into nebulous areas of shifting form, color and tone. These types of surfaces, analogous to those found in post-war abstract painting, are re-contextualized through de los Reyes’ saturation of unprimed linen with multiple layers of fabric dyes. Above these fields of color, de los Reyes superimposes demarcations in oil, either through the use of singular, thin lines or gridded expanses of marks which explicitly refer to locations along the US-Mexico border. The resulting works imply how our cognition of space, and the process of its utilization, forms the basis for both personal and political consciousness.

Tony de los Reyes’ work was the subject of the exhibition and catalog Chasing Moby-Dick: Selected Works by Tony de los Reyes (2010) at the Santa Barbara Museum of Art. In December 2012 a selection of this survey will travel to the New Britain Museum of American of Art. In 2011 he was a recipient of both a City of LosAngeles (COLA) grant and a California Community Foundation Fellowship. Reviews and articles include Art in America, X-TRA, Modern Painters and the Los Angeles Times. De los Reyes received an MFA from the San Francisco Art Institute. He lives and works in Los Angeles.