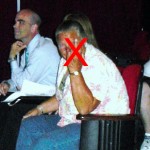 As we close out this year, I would like to set a better tone going forward.  We think our readers value our political coverage, but we also feel that we can accomplish those means in a better way – by not resorting to more snarkiness than is required.

To that end, we are going to end the use of the phrase “Usual Suspects.”  We have often used the phrase “Usual Suspects” to refer to a group of community leaders here in Santa Ana who have consistently used City Hall to attack our immigrant community.  Over the years they have used our local government, consistently, to make life hard for the many Mexicans and Central Americans who live here in town.  Their actions have included:

I think you get the point.  Over the past few years however there has been a real change at City Hall as we now have an all-Latino City Council that does not support such actions.  As such I no longer see a need to use the phrase “Usual Suspects.”  There are less of them now than ever – and by January they will all be gone from our City Commissions.  Moreover, none of them have even a remote chance of being elected to our City Council.  We are free at last.

I urge these people to now put aside their past hatreds and learn to work with the City Council and with the community at large for the betterment of our city.  It is time to move on folks.

We will do our part by ending the use of the phrase “Usual Suspects.”  And we will endeavor to cover our political scene in a kinder fashion.  Let us all then work to make things better here in Santa Ana.  Don’t just complain – please let us know what YOU think our city leaders should do to foster positive improvements at City Hall.

Our suggestions for making Santa Ana a better place for our working families include:

Your turn.  What would you do to improve Santa Ana?