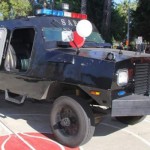 The arrests included, but were not limited to the following:

The Santa Ana Police Department’s Investigations Bureau continues to address gang-related violence through education, intervention, prevention, and enforcement. To date, the Gang Unit has made over 150 gang-related arrests and seized 28 firearms. Future intra-agency and allied agency enforcement operations are planned.