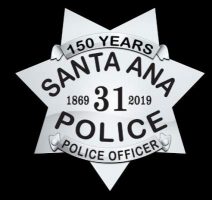 Santa Ana Police Chief David Valentin is pleased and honored to announce the Employer Support of the Guard and Reserve (ESGR), a United States Department of Defense agency, is recognizing the Santa Ana Police Department as a Patriotic Employer for its continued support for employees serving in the United States Armed Forces Guard and Reserve. The Employer Support of the Guard and Reserve (ESGR) is a Department of Defense program, established in 1972 to promote cooperation and support between Reserve Service members and their civilian employers across the nation to assist in the resolution of conflicts arising from an employee’s military commitment. Receiving this recognition publicly affirms the Santa Ana Police Department recognizes, honors, and continues to proactively support the Uniformed Services Employment and Reemployment Rights Act (USERRA).

Each year, members of the Santa Ana Police Department in the National Guard and Reserves answer the call to serve on the frontlines in conflict zones abroad, as well as in times of state and national emergencies at home. The Santa Ana Police through its Military Liaison Program works to support its employee’s military service by implementing policies that support deployment as well as assisting family members left behind. The Police Department actively recruits members of the armed services to join its ranks and realizes the value that military service members get from their military training they can bring back to the workplace.

“I am excited to see our Police Department be acknowledged as an employer that cares for our members in the National Guard and Reserve. I respect that the City has gone above and beyond to meet the needs of our military reservists.” – Mayor Miguel Pulido

“It is an honor to serve in a city that supports all employees that choose to serve in the National Guard and Reserve. As a veteran serving in the United States Army for four years, I am proud to see eight members of our Police Department’s Military Reservists stand with their department to accept this award.” – Mayor Pro Tem Juan Villegas

“I am proud that our police department is recognized as an employer that supports all employees serving in the National Guard and Reserve. It is important to maintain policies that recognize the service of our military reservists and honor their bravery.” – Councilmember David Penaloza