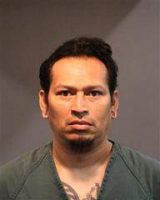 After receiving tips about a suspect, Israel Castaneda (43), allegedly engaged in the possession and/or distribution of child pornography, a Santa Ana Police Department (SAPD) civilian investigator launched a month’s-long investigation.

As part of the Department’s commitment and participation in the Internet Crimes Against Children Task Force, the SAPD investigator authored numerous search warrants and culminated this long-term investigation with a residential search warrant in Santa Ana.

This morning, members from the Santa Ana Police Department Directed Patrol Unit arrested Suspect Castaneda for the possession and distribution of child pornography. Castaneda was later booked into the Santa Ana Jail.

The Santa Ana Police Department takes pride in its efforts to safeguard our children. Our participation in the Internet Crimes Against Children Task Force and the results of this case highlight the benefits of partnering with our local, state, and federal law enforcement partners to combat the exploitation of our children with pro-active, technology-based investigative tactics to protect our most vulnerable population: OUR Children!