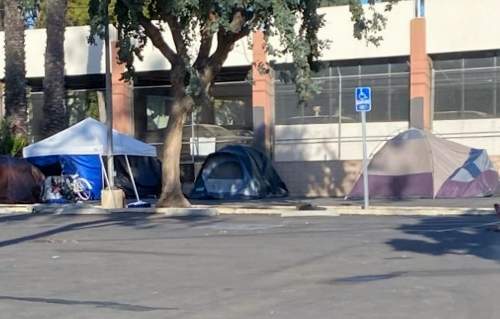 At tomorrow night’s City Council meeting, the Santa Ana City Council will be discussing the large homeless encampment that has sprouted up on Ross St. in the wake of the abrupt closing of the Courtyard homeless shelter in DTSA, as reported by the Saving Santa Ana Facebook page.

The new homeless encampment is right next to at least five schools and a public library:

On Tuesday night, March 2, the Santa Ana City Council will be discussing a closed session action item regarding the increase in homeless encampments at the 837 N. Ross St. Join the Zoom Webinar directly at https://us02web.zoom.us/j/315965149.

What is being discussed in whether the City should have Code Enforcement rules upheld or let it slide.

Unfortunately the City currently is very strict about who can stay at their homeless shelters. As a result many of the homeless end up in the streets. Generally the City requires proof that the homeless are from Santa Ana. However that is a moot point. They are here and they are not leaving! Many have been here for years. Santa Ana is the County seat, which attracts the homeless as they come here to avail themselves of County and State services.

This situation poses a conundrum for the City of Santa Ana. They can face potential legal issues if they look the other way and allow the homeless encampment to continue. However if they make exceptions as to who can stay at their shelters that too will result in problems as those exceptions will become the new standard.

You can call in to the City Council meeting, which will be conducted virtually due to the COVID-19 pandemic at around 4:45 p.m.

Speakers will be called in order of call-in time starting at 5 p.m. It won’t take long and you should be done by 5:20 or so.

If you are not comfortable speaking, you can submit a brief one or 2 sentence opinion via email. Email: Send your comments in by 4:00 p.m. on Tuesday, to eComment@santa-ana.org.

The Agenda item in question is: CONFERENCE WITH LEGAL COUNSEL – POTENTIAL LITIGATION Significant exposure to litigation pursuant to paragraph (2) or (3) of subdivision (d) of Section 54956.9 of the Government Code: One Case, El Centro Cultural de Mexico.