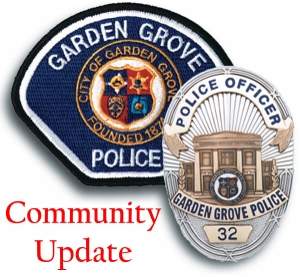 On August 11, at 12:06 PM, Garden Grove Police Department Officers responded to the 9500 block of Lampson Ave., regarding a possible hit-and-run traffic collision.

Upon arrival, they located a 77-year-old male in the roadway with life threatening injuries. The victim was transported to a local area hospital, where he succumbed to his injuries.

What the victim was doing in the street remains under investigation. The victim was not in a crosswalk when he was hit. The collision occurred in a residential area in Garden Grove that has one lane of traffic going in either direction. Residents are known to park their cars along that road, near Gilbert Street.

The suspect (George Wahba, 26-year-old of Stanton) fled the scene prior to officers’ arriving. Wahba continued eastbound on Lampson toward Brookhurst Avenue after the crash.

Wahba was driving a Black Subaru sedan when he hit the 77-year-old man. He and the vehicle were located shortly after, in the City of Stanton. The police officers found that there was traffic collision damage to Wahba’s car and evidence that it was involved in the collision.

The victim’s name is being withheld at this time pending notification of his relatives.

Wahba was booked into Orange County Jail for felony hit and run.

Anyone with information on this incident is asked to contact Investigator Mihalik at 714-741-5925.