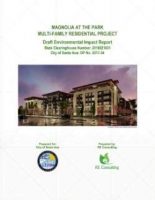 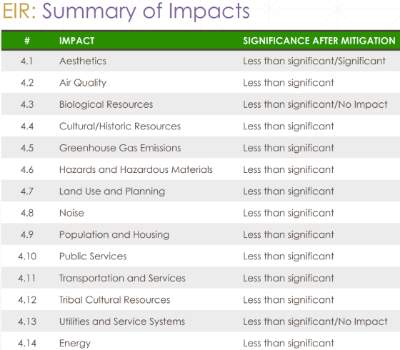 As you might imagine the City of Santa Ana received quite a few public comments while the EIR was compiled. However most of the comments did not focus on environmental issues but instead had to do with concerns related to the “economic and social effects” of the proposed project.

Did you know that almost no EIRs for infill projects of the size of the 2525 Main St. project result in findings that do not have significant impacts for noise, traffic and dust? As such I was very surprised that the EIR for this project found that these impacts were less than significant. 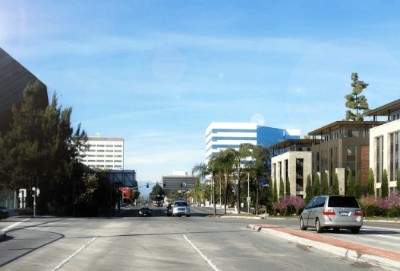 The EIR in fact concluded that the proposed apartment development was a consistent land use for the site. As you might know this property is not currently zoned for an apartment development. It is zoned for office or retail use. The Santa Ana Planning Commission and/or the Santa Ana City Council will have to approve a zoning change in order for this project to advance.

The EIR ultimately found that a multifamily apartment complex fit into the city’s general plan, and in fact noted that the project could be an ideal buffer for the single family homes in Park Santiago.

How is that possible? Well if the developer was to tear down the dilapidated office building that is currently on the site and build a larger office tower the notion is that this would create a much larger traffic impact on the surrounding neighborhood as office complexes get hundreds if not thousands of visits on a daily basis while housing tenants tend to go to work then come home – with a few errands and diversions in between.

The EIR also stated that there would be less than significant impacts on the cities’s infrastructure (such as sewer and water), and specifically that there is more than significant capacity for the City to provide all the required utilities to the site.

With regard to public services the EIR pointed to the fact that the City of Santa Ana is in need of students because the local school district is under-enrolled and that less than one police officer would be needed to police the project, but found impacts that were less than significant because the project’s fiscal benefits far exceeded the cost of services. 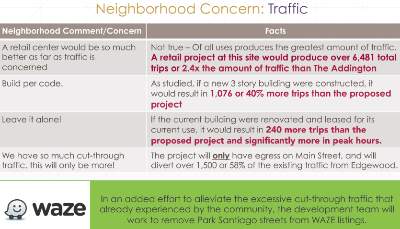 Finally with regard to traffic the EIR found no significant impacts and that any other use would produce more trips than multi-family use.

The one aspect of the project that will be a significant change from the current use of the property will be the aesthetics but the developer has modified the project to include tiered building height from 2 to 5 stories on the east side of the development, to minimize the visual impact on the Park Santiago Neighborhood.

We are planning on writing additional articles about this project and its impact on the surrounding area in north Santa Ana in the next week.

« A man suspected of robbing and shooting two men and trying to carjack another was arrested in Garden Grove
The O.C. Rescue Mission needs food donations so they can feed the homeless on Thanksgiving »