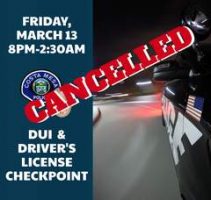 The Costa Mesa Police Department (CMPD) has cancelled a driving under the influence (DUI) and driver’s license checkpoint on Friday, March 13, 2020, from 8:00 p.m. to 2:30 a.m. within the city limits.

Checkpoint locations are based on history of DUI crashes and arrests. During the checkpoint, officers will look for signs drivers are under the influence of alcohol and/or drugs, as well as check drivers for valid licenses.

CMPD reminds drivers that “DUI Doesn’t Just Mean Booze.” Prescription or over-the-counter medications with an “operating heavy machinery” warning on the label can also impair. While medicinal and recreational marijuana are legal, driving under the influence of marijuana is illegal.

In 2018, 1,069 people were killed on California roads in crashes involving drivers who had a blood alcohol content over the legal limit (.08 or above). Last year, CMPD investigated 72 DUI crashes, which killed four people and resulted in another 109 injuries.

CMPD offers these reminders to ensure you have a safe night of fun that does not involve a DUI:
Always use a designated sober driver – a friend who is not drinking, ride-share, cab or public transportation – to get home.
If you see someone who is clearly impaired try and drive, take the keys and help them make other arrangements to find a sober way home.
Report drunk drivers – Call 911.
If you are hosting a party, offer nonalcoholic drinks. Monitor those who are drinking and how they are getting home.
A DUI charge is not cheap. Drivers caught driving impaired and charged with DUI can expect the impact of a DUI arrest to be upwards of $13,500. This includes fines, fees, DUI classes, license suspension and other expenses not to mention possible jail time.

Funding for this checkpoint is provided to CMPD by a grant from the California Office of Traffic Safety, through the National Highway Traffic Safety Administration.