Suspect Isaias Arroyo (23) saw himself on TV news stories reference this case and turned himself in to detectives at the Santa Ana Police Department.

Suspect Arroyo was interviewed by detectives and booked at the Santa Ana Jail for assault with a deadly weapon.

SUSPECT DESCRIPTION: Male, Hispanic, 5’6”, 210 lbs., wearing a grey sweatshirt with a “Chargers” logo on the front and jeans.

The restaurant manager/victim attempted to stop a physical altercation that was occurring in the parking lot when the suspect exited the restaurant and struck the victim with a beer bottle to the head. The suspect fled in a dark colored Jeep Cherokee.

Anyone with information on the identity of the subject and/or whereabouts is asked to contact Detective Corporal McClaskey at (714) 245-8309 / pmcclaskey@santa-ana.org or Orange County Crime Stoppers at 1-855-TIP-OCCS. 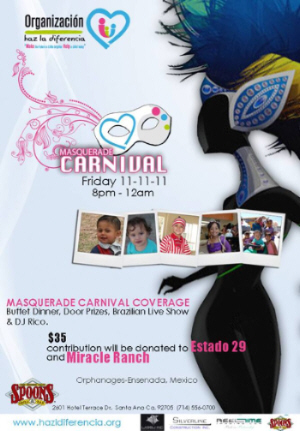 Organizacion Haz la Diferencia is hosting a Masquerade Carnival fundraiser on Nov. 11, from 8 pm to 12 midnight, at Spoons Restaurant, located at 2601 Hotel Terrace Drive, in Santa Ana.  Tickets are $35.  100% of the proceeds go to helping underprivileged children in Ensenada!

Tickets can be bought pre-sale or at the door.

The event includes a buffet dinner, door prizes, and a Brazilian Live Show, as well as DJ Rico. END_OF_DOCUMENT_TOKEN_TO_BE_REPLACED 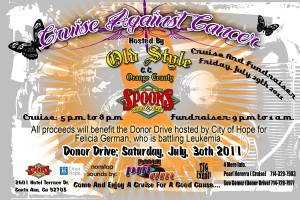 Come enjoy a night for a good cause Old Style Car Club, Friday Night Cruz at SPOON’s on Friday, July 29, 2011, from 5pm to 8pm.  Following Cruz Night there will be a Fundraiser Event, from 9pm to 1am.  Dj: by pm/am.

All proceeds from the event will cover the Donor Drive, hosted by City of Hope for Felicia German, who is battling Leukemia.