The City of Santa Ana has regulations in place to protect our neighborhoods and major thoroughfares from blight or unsightly conditions potentially caused by illegal signs. The Santa Ana Municipal Code prohibits advertising on public property, including but not limited to posting signs or posters on curbs, utility poles, traffic signals, and trees. If you’re caught posting signs in a right-of-way, you can be ticketed up to a $1,000 citation per location.

Recently, the City of Santa Ana conducted a targeted sweep, resulting in the removal of over 400 illegal signs from our streets along with several citations issued. The City has also added an “Illegal Signs” reporting function to the MySantaAna mobile app where the public can report illegal signs as a service request to have the signage removed. END_OF_DOCUMENT_TOKEN_TO_BE_REPLACED

The Martinez sign was on a private property which means that the Perez supporter was trespassing.  He left his fingerprints behind on the sign he had torn down and ripped up.  The sign has been turned over to the Santa Ana Police Department. END_OF_DOCUMENT_TOKEN_TO_BE_REPLACED 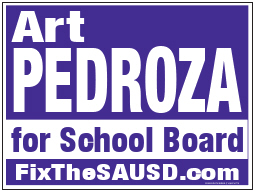 Thank you to those of you who have been sending in contributions.  We ordered our campaign signs and they will be ready by this Friday.  Our competitors’ signs are already falling apart due to the rain.  We ordered the very best, weatherproof signs.  They will hold up through the election.

We are in the home stretch!  Please keep spreading the word.  Everywhere I go in town folks know about our campaign and the feedback has been very positive.

Thank you all for your support!  On Nov. 2, we just might make history.