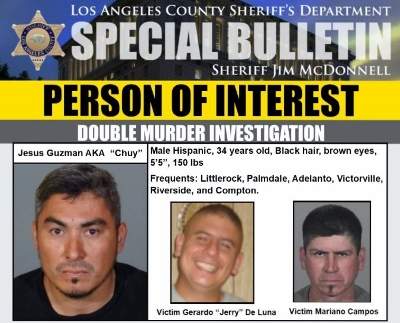 Los Angeles County Sheriff’s Department Homicide Bureau Detectives continue to seek Person of Interest, Jesus “Chuy” Guzman regarding a double murder which occurred February 20, 2018 on the 11000 block of Hample Avenue, Littlerock, CA. and the discovery of human remains found at the 30900 block of 106th Street in the unincorporated area of Littlerock, CA on October 11, 2018

LOS ANGELES SHERIFF’S DEPUTY CONVICTED OF REPEATEDLY ASSAULTING WOMAN, WITH WHOM HE WAS IN A RELATIONSHIP, AFTER SHE DISCOVERED SEXUAL RELATIONSHIP WITH ANOTHER WOMAN

SANTA ANA – A Los Angeles County Sheriff’s deputy was convicted yesterday of repeatedly assaulting a woman, with whom he had a relationship, after she discovered on Christmas Day that he was sexually involved with another woman. Mark Eric Hibner, 44, Anaheim, was found guilty by a jury yesterday, Oct. 22, 2013, of two felony counts of domestic battery with corporal injury and three felony counts of criminal threats. He faces a maximum sentence of eight years in state prison at his sentencing Nov. 15, 2013, at 9:00 a.m. in Department C-29, Central Justice Center, Santa Ana.

At the time of the crimes, Hibner was a 22-year deputy with the Los Angeles County Sheriff’s Department. He was involved in a romantic relationship with Jane Doe #1 for several years. END_OF_DOCUMENT_TOKEN_TO_BE_REPLACED