FULLERTON – A Los Angeles County Sheriff’s Department (LASD) deputy is scheduled to be arraigned tomorrow for threatening and assaulting a woman including lighting her hair on fire. Alejandro Flores, 33, Buena Park, is charged with three felony counts of domestic battery with corporal injury, two felony counts of assault with force likely to produce great bodily injury, one felony count of aggravated assault, one felony count of criminal threats, one felony count of dissuading a witness by force or threat, and one felony count of false imprisonment by menace or violence with sentencing enhancement allegations for great bodily injury inflicted during domestic violence and the personal use of a firearm. If convicted, he faces a maximum sentence of 25 years and eight months in state prison. He is scheduled to be arraigned tomorrow, July 7, 2015, at 8:30 a.m. in Department N-3, North Justice Center, Fullerton.

At the time of the crime the defendant was a LASD deputy and was in a romantic relationship with Jane Doe. The defendant lived with the victim and a child relative under two years old in Buena Park. END_OF_DOCUMENT_TOKEN_TO_BE_REPLACED 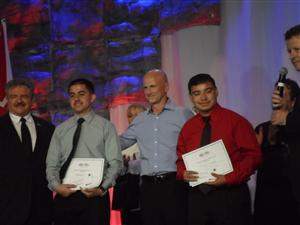 Sebastian Alvarado, an AVID freshman at Century High School, and Alejandro Flores, a junior at Valley High School, were recently recognized at the British American Business Council of Orange County gala dinner at the Anaheim Hilton and awarded a two week all-expense paid trip to study British history over the summer.

The British American Council OC Student Scholarship Program awards two scholarships based on an essay contest. Sebastian learned about this opportunity at his local Boys and Girls Club where he plays soccer. Sebastian is no ordinary young man. He has undergone three open heart surgeries and has successfully recovered each time putting 100% into being a successful student. END_OF_DOCUMENT_TOKEN_TO_BE_REPLACED