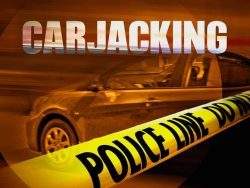 Meadows Jr. is facing numerous felony charges after he allegedly carjacked the pregnant woman at about 4:15 p.m. Friday in the 2000 block of East Kemper Avenue, between the Garden Grove (22) Freeway and Fairhaven Avenue, according to the SAPD.

The victim was taken to an area hospital where she was listed in critical condition but was expected to survive.

Meadows was arrested last Saturday. Meadows is now facing felony charges of attempted murder, carjacking, robbery and assault with a deadly weapon. The OCDA is also seeking sentencing enhancements for inflicting great bodily injury on the victim, causing paralysis or a brain injury, causing injury that terminates a pregnancy and the personal use of a deadly weapon.

Meadows will be in court on May 26 for his arraignment at a jail courtroom in Santa Ana.

« Transient gets life in prison after a kidnapping and murder in Anaheim
The O.C. Sheriff arrested a man who opened fire at an O.C. church this afternoon »