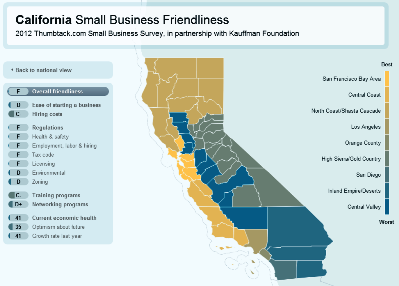 Orange County small businesses healthiest, most optimistic about the future

“I think California has gotten a lot of bad press for its negative treatment of businesses. I do not see that in any way. What I do see is a very competitive market (with an emphasis on “very”).”
– Photographer, Yorba Linda

There are a lot of “business climate rankings”, but there aren’t any that draw upon considerable data from small business owners themselves. The Thumbtack.com Small Business Survey is the only survey to draw data from an extensive, nationwide universe of job creators and entrepreneurs themselves in order to investigate the best places in the country to do business.

“After a two-month survey of over 6,000 small business owners nationwide, it’s clear that California is failing in the eyes of its small businesses,” said Sander Daniels, co-founder of Thumbtack.com. “Orange County is doing its best to lift up the state, but it’s difficult to overcome the damage done by California’s other regions”

Some of the key findings for the region include:

Although California struggled overall, it ranked well for one important category. When compared against its neighbors in the West, California is the region’s #4 least-costly for hiring a new employee.

The full survey results can be seen here and include full sets of rankings, dozens of easily searchable quotes from California small businesses, regional comparisons within states, and Census data comparing California’s key demographics against those of other states.

“There are so many hoops to jump through. I have to get a license for one thing, another license for a slight variation on something else, and there are so many fees. A person, like myself, who hardly makes any money has to pay so much in taxes and to the license fees that are the same for $10,000 made or $20,000. The individual cities all want business licenses which makes more red tape and fees.”
– Personal trainer, Orange

Thumbtack.com and Kauffman ranked states and cities against one another along 15 metrics. The full methodology paper can be found here.

Thumbtack.com is a place where you can hire help locally. Need a DJ, carpenter, boot camp instructor, or hot dog truck caterer? Tell us what you need, and we’ll bring you 3-5 bids on that job to your email inbox within 24 hours. More than 275,000 small businesses and freelancers have listed their services on Thumbtack nationwide.