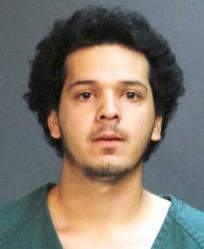 One of the adult passengers (Male 23) Santa Ana died as a result of the impact, name not released pending notification of family. The driver and three remaining passengers were transported to local trauma centers for their injuries. The Collision Investigation Unit responded to investigate.

The Driver Ulises Mendoza (20) of Santa Ana was treated at the hospital for his minor injuries, released to the Santa Ana Police Department were he was arrested and booked at SAPD Jail for.