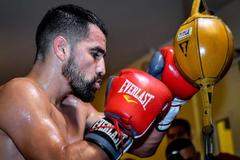 Watch Santa Ana’s very own Ronny Rios (28-1) during the biggest fight of his career this Saturday, August 26, 2017 when he challenges WBC super-bantamweight champ Rey Vargas at the StubHub Center in Carson, CA. The fight, which will also be shown live on HBO Boxing starting at 6:45 p.m. is the co-main event for Miguel Cotto vs. Yoshihiro Kamegai.

At 27 years of age, Rios is an American professional boxer in the Featherweight division who began boxing when he was 13 years old at the TKO Boxing Club in Santa Ana. He rose quickly in the world of amateur boxing and went on to win a National Golden Gloves and two U.S. National Bantamweight Champions in 2012. On November 21, 2015 Ronny defeated Jayson Velez at the Mandalay Bay Arena in Las Vegas to win the WBC Silver Featherweight Championship. Rio’s younger brother, Alexis Rocha, will also be fighting at the StubHub Center on Saturday.