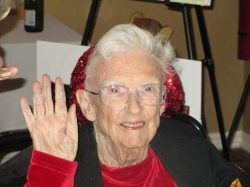 During World War II she worked at San Diego’s Consolidated Vultee aircraft factory while Jim was a Marine Corps officer serving in the Pacific.

Enid raised two adoring daughters Lynne and Gayle. The family lived in Beverly Hills where she volunteered as a Girl Scout Leader, Neighborhood Girl Scout Chairman and as member of the West Hollywood Lions Club. She was very active in the Christian Science Church including working in the Reading Room, also as a Sunday school teacher and reader to patients in nursing homes.

She loved to swim, dance (especially clogging) and vacation in Hawaii. Other favorite things include George Strait music, Soarin’ Over California ride at California Adventures Disneyland, the family dogs, Mariachi Music, flan, Dancing With the Stars, the Pig Raises at the Orange County Fair and gardenias.

Enid was a talented artist painting portraits of friends and family dogs. Everybody loved Enid and her pictures and videos were a facebook sensation. Enid’s birthday in Heaven where she can soar for real, will be celebrated by her daughters Lynne Stewart of Hollywood, Gayle Stewart of Santa Ana, her sister, Ruth Greife of Bradbury, long time care giver Joy Detangco,”adopted son” Ralph Garcia of Costa Mesa, friends, relatives and the family pets Roxie and Toby.