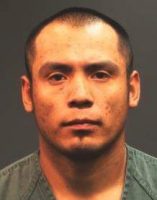 Sergio Joaquin Mendoza, a 27-year-old man was convicted Thursday of carving his name on his girlfriend’s chest with a razor blade and several other attacks in Santa Ana two years ago, according to the O.C. Register.

Mendoza evaded a felony kidnapping charge but he was convicted of misdemeanor and felony counts of false imprisonment.

To top it all off Mendoza was also convicted of a felony count of kidnapping for another incident as well as felony counts of corporal injury on a cohabitant and criminal threats.

Unbelievably Mendoza is only looking at about four years behind bars. He would have been sent to prison for more than 11 years if he had been convicted on all the charges.

Mendoza and his victim were renting a room in his grandmother’s home in Santa Ana at the time of the attacks, back in March of 2015, according to the SAPD.

Mendoza and the victim got into an argument on March 17, 2015, then Mendoza hit her and he did not allow her to leave the home.

Mendoza was also accused of forcing the victim to go to work with him for four or five days. He allegedly made the victim sit in his car while he was at work.

On March 22, 2015, the situation escalated as Mendoza again refused to let the victim leave the house and then he carved his first name on her chest with a razor blade. He also apparently carved some sort of apology on his own chest.

Mendoza’s own grandmother and uncle finally kicked him out of the house at that point. That evening he forced his victim into his car and drove her around to several parking lots in the city. She was able to get out of the car at some point and a local business owner called 911 for her.