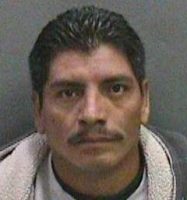 SANTA ANA, Calif. – A man was sentenced today to life in state prison without parole for forcibly raping a preteen girl resulting in pregnancy. Demetrio Rojas Perez, 40, Santa Ana, was found guilty by a jury on June 27, 2016, of four felony counts of aggravated sexual assault of a child under 14 and one felony count of forcible lewd acts on a child under 14. Sentencing enhancement allegations for inflicting bodily harm on a victim under 14 years of age and personally inflicting great bodily injury during the commission of the above offenses were found to be true. For the first time in an Orange County sexual assault case, Perez was sentenced to life in state prison without the possibility of parole, plus 60 years to life in state prison.

Perez was in a position of trust with access to the victim. Beginning in December 2013, Perez assaulted 12-year-old Jane Doe numerous times including forcible rape and forcible digital penetration. Jane Doe attempted to fight back and scream, but the defendant covered her mouth and threatened to kill the victim and her family if she reported the assaults. Perez continued to attack the victim over the course of seven months.

In mid-2014, Jane Doe discovered she was pregnant and reported the rapes. DNA evidence confirmed Perez impregnated the victim.

The defendant was sentenced to life in state prison without parole under California’s One Strike Law (penal code 667.61), which was enacted in 1994. In September 2010, the One Strike Law penal code was amended to add a mandatory sentence of life in state prison if certain underlying forcible sex crimes are committed against a minor victim with one or more of the enumerated “major” factors or two or more of the enumerated “minor” factors. The “major” factors are (1) prior qualifying offense, (2) aggravated kidnap, (3) aggravated kidnap or torture, (4) residential burglary with sexual intent, (5) any of the above in concert, (6) great bodily injury, and (7) bodily harm on a victim under 14 years of age. The “minor” factors are (1) kidnap, (2) burglary, (3) use of a weapon, (4) multiple victims, (5) tying or binding, (6) administering drugs, and (7) any of the above in concert. In our case, forcible lewd acts on a child under 14 is a qualifying offense and the sentencing allegations of bodily harm to a victim under 14 years of age and great bodily injury are each major factors.