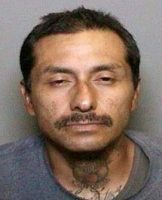 On Sunday, 6-18-17, Fountain Valley police officers responded to a possible kidnapping and domestic violence incident in the 16000 block of Harbor Blvd.

Several witnesses reported a male suspect assaulted a female victim at the business and dragged her into a dark colored Saturn SUV which fled northbound on Harbor.

The vehicle was still occupied by the suspect and victim who were detained at the scene. The suspect, Jorge Hugo Molina, a 39 year old male from Santa Ana, was restrained from the victim for previous domestic violence incidents.