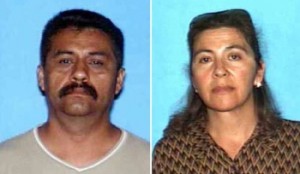 SANTA ANA – A married couple will be arraigned tomorrow for stealing between $400,000 and $500,000 in death benefits over a 7-year period by faking the husband’s death. Santiago Carrasco, 51, and Rosa Carrasco, 53, both of Santa Ana, are each charged with two felony counts of grand theft with sentencing enhancements for aggravated white collar crime over $100,000 and property loss over $200,000. If convicted, the defendants both face a maximum sentence of seven years and eight months in state prison. They are being held on $500,000 bail each in this case and are both subject to a no-bail U.S.

Prior to 2004, Santiago Carrasco is accused of living with his wife, Rosa Carrasco, for approximately two decades under the assumed name Lucio Rodriguez.

In the summer of 2004, the defendants are accused of plotting to fake “Lucio Rodriguez’s” death so that the couple could
collect Social Security and union pension death benefits. In August 2004, Santiago Carrasco is accused of traveling to
Mexico and bribing authorities in order to obtain a death certificate under his alias using fraudulent information that he had died in Mexico of a heart attack. He is accused of then returning to the United States and living under his real name.

The couple is accused of continuing to live together in Santa Ana after the fake death of Lucio Rodriguez. Beginning in
September 2004, Rosa Carrasco is accused of collecting financial death benefits on behalf of her husband and her until
both defendants were arrested yesterday, Aug. 1, 2011.

In all, the defendants are accused of collecting between $400,000 and $500,000 in fraudulently obtained funds. The Orange County Sheriff’s Department and U.S. Social Security Administration began investigating this case after receiving
information that the defendants had faked Santiago Carrasco’s death. The investigation is ongoing.

« Should the Santa Ana City Council hire Paul Walters as the new City Manager?
Santa Ana’s gay community is organized and having an impact in the city »