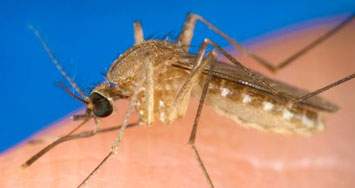 “This unfortunate death shows how serious West Nile Virus infection can be,” said Dr. Eric G. Handler, County Health Officer. “West Nile Virus activity tends to peak in August and September in Orange County, but we continue to have cases occur throughout the fall. It is important for people to remember that the end of summer does not mean the end of West Nile Virus season.”

Orange County has 36 symptomatic WNV infections, of which 30 were hospitalized. These include 28 cases of West Nile Neuroinvasive Disease and 8 West Nile Fever. Four asymptomatic blood donors have tested positive for WNV infection through routine donation screening. Santa Ana has the highest number of infections in Orange County this year; however infections have occurred throughout the county. Because about 80% of people infected with WNV have no symptoms, and the majority of cases of West Nile Fever do not seek medical care and are not tested, the reported cases greatly underestimate the number of affected people in our County.

County health officials point out that it is especially important to take precautions against mosquito bites during the peak West Nile Virus season. Recommended WNV precautions include:

Symptoms of West Nile Fever include fever, headache, body aches, nausea, tiredness, and sometimes swollen lymph glands or a skin rash. Anyone who develops the more serious symptoms of West Nile Neuroinvasive Disease, such as severe headaches, neck stiffness, confusion, muscle weakness, or vision loss should seek medical care immediately. People over 50 years of age and those with certain medical conditions are at increased risk of serious complications from West Nile Virus infection.

Information on mosquito control is available on the Orange County Vector Control District’s website at www.ocvcd.org. Other websites with helpful information about West Nile Virus include:

« Santa Ana awarded $3.3M in active transportation funding by the CTC
The SAUSD spent more than $6.4M on lawsuits over the past three years »