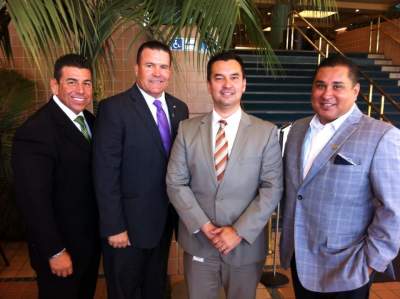 Hugh Nguyen was reelected as the Orange County Clerk-Recorder in the November General Election.  Nguyen is the first Vietnamese American to be elected to the Clerk-Recorder office in United States. He will serve over 3.1 million residents in Orange County.  Nguyen, a longtime resident of Santa Ana, was previously appointed by the O.C. Board of Supervisors to complete the term of his predecessor, Tom Daly, who moved on to the 69th Assembly District.

Nguyen will be sworn in at the County of Orange Hall of Administration, located at 333 W Santa Ana Blvd, in Santa Ana, on January 2, 2015.  The swearing will start promptly at 10:00 A.M. and after the swearing refreshments will be served at the Clerk-Recorder’s office.

Nguyen has over 19 years of experience at the County of Orange. He was selected by the County Board of Supervisors from over 900 candidates to the Clerk-Recorder position in April 2013. The Supervisors stated when they selected Nguyen that he was the “most qualified candidate due to his practical knowledge of the Clerk-Recorder’s office” and his “proven management abilities”.  He has reorganized the Clerk-Recorder’s office to reduce management positions and increase staff accountability, implemented new internal controls over contracts and personnel actions, development plans for maintaining our automated systems and started monthly Saturday Clerk Services for marriage licenses, marriage ceremonies, passport applications and copies of marriage, birth and death certificates to better serve the public.

Nguyen has been a resident of Orange County for 34 years. He was brought to the US at age 7 and raised by his Grandparents and Aunt.  His wife of 23 years is a Mexican-American born in the United States.  Nguyen was born in Vietnam.  HIs mother was Vietnamese and his father was an American soldier.  Nguyen and his wife have two wonderful children who represent what makes America great – a blending of cultures and races.