Man convicted of escaping from the O.C. Jail and kidnapping a cab driver 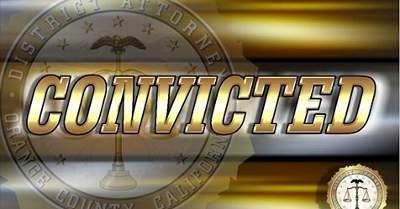 SANTA ANA, Calif. – The first of three inmates charged with carrying out an elaborate escape from the Orange County Men’s Central Jail along with two other inmates in 2016 has been convicted of the escape and kidnapping of a 72-year-old cab driver to help aid in the escape. The three escaped inmates were the targets of a statewide manhunt that lasted more than a week.

He faces a maximum sentence of eight years and eight months in state prison. He is scheduled to be sentenced on May 14, 2021.

On January 22, 2016, Duong is accused of escaping from the Orange County Men’s Central Jail along with inmates Hossein Nayeri and Jonathan Tieu after spending several weeks cutting through jail vents in order to access the jail’s plumbing tunnels and climb up on the jail’s roof.

Duong and the other two inmates are accused of using jail sheets to rappel down the side of the jail. Later that day, Duong called an unlicensed taxi service he located in a Vietnamese-language periodical, and 72-year-old Long Ma arrived to drive the three escapees to various points in Orange County and Rosemead. At various points, Duong held the cab driver at gunpoint.

Over the next few days, the three escapees and the abducted cab driver drove to various locations around California, ending up in San Jose.

On January 29, 2016, Duong drove with Ma back to Southern California. Duong arranged to turn himself in at a Santa Ana auto shop and after dropping Duong off at the auto shop, Ma drove away.

Nayeri and Tieu were captured in San Francisco the next day after a man recognized the two escapees from media reports.  Then -Orange County Supervisor Todd Spitzer presented Matthew Hay-Chapman with a $100,000 reward for providing the information that led to the capture of Nayeri and Tieu.

When he escaped, Duong was facing charges for attempted murder with a 25-life gun-use enhancement, assault with a firearm, first-degree burglary, and discharging a firearm at an inhabited dwelling.  His trial is still pending on those charges.

Nayeri was sentenced in October to two consecutive terms of life without the possibility of parole along with another seven years to life for kidnapping and torturing a marijuana dispensary owner. After the commission of those crimes in October of 2012, Nayeri fled to the country of Iran, before traveling to the Czech Republic where he was arrested and extradited to the United States.

Nayeri and Tieu are still awaiting trial on the jail escape.