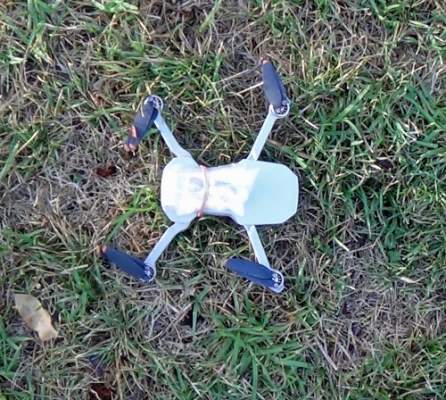 ORANGE, Ca. (Sept. 16, 2021) The Custody Intelligence Unit (CIU) on Tuesday, Sept. 14, arrested a man suspected of using a drone in an attempt to smuggle drugs into the Theo Lacy Facility in Orange.

CIU investigators were advised of a drone carrying narcotics that landed in an outdoor recreation area of the jail. The drone was carrying 2 grams of heroin, 4 grams of methamphetamine, approximately 15 Xanax pills and approximately 15 muscle relaxers.

Through their investigation, the CIU identified a possible suspect in the city of Costa Mesa and obtained a search warrant for the man’s residence. During their search, investigators confiscated numerous illegal firearms, fentanyl and a controller determined to pair with the drone that landed at Theo Lacy.

The suspect also was found to be in possession of a stolen vehicle and had been renting his residence using fraudulent identification. Investigators also recovered materials determined to be associated with identify theft and fraudulent criminal activity in the man’s residence.

Chey Cody Smart, 43, of Costa Mesa was arrested on suspicion of multiple felony drug and firearms charges, along with grand theft. He was booked into the Orange County Jail on Sept. 14. It also was determined Smart had a warrant for his arrest issued by Mendocino County, California for felony weapons charges.

“The Custody Intelligence Unit is extremely proactive in intercepting narcotics attempting to come into our jails,” said Sheriff-Coroner Don Barnes. “They have adopted an investigative strategy that includes locating the outside entities attempting to bring narcotics into our facilities, and this case is a great example of that work. We will continue to stay diligent in keeping those entrusted to our custody and care safe, and we will hold accountable those who attempt to threaten that safety.”