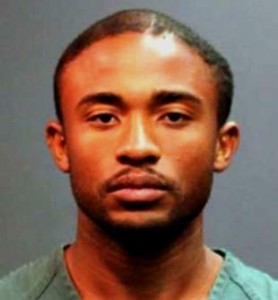 Officers responded to the area and detained the suspect (Isaiah Gassaway) without incident. Investigation determined that a subject had been taking photographs of the homeless population and this angered the suspect. The suspect then brandished the pickaxe at the photographer and chased him with it.

Further investigation determined that the vehicle in which suspect Gassaway had been seen inside was a reported Santa Ana stolen vehicle.

A second victim had been recording the incident on his phone when suspect Gassaway confronted him with the pickaxe and demanded the phone. The victim refused to hand over the phone and entered his vehicle in an attempt to get away. The suspect hit the victim’s vehicle with the pickaxe causing minor damage.