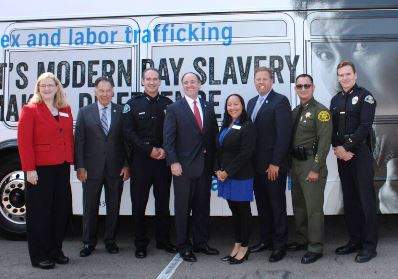 IN THEIR OWN WORDS: 2015 HUMAN TRAFFICKING REPORT DOCUMENTS WHAT SURVIVORS OF SEX AND LABOR TRAFFICKING WANT LAW ENFORCEMENT AND SERVICE ORGANIZATIONS TO UNDERSTAND

SANTA ANA, Calif., Aug. 20, 2015 — Every victim removed from a dangerous human trafficking situation is cause for celebration, as overwhelmingly evident in the victims’ own words about these heinous crimes and captured in the latest report from the Orange County Human Trafficking Task Force (OCHTTF).

The 2015 Human Trafficking Victim Report also documents the successful evolution of the OCHTTF into a fully operational multijurisdictional task force. Although fewer reports of human trafficking were documented during this transition, the more than 80 partners comprising the OCHTTF now have the coordinated structure and systems in place to better identify, investigate, prosecute and provide services to human trafficking survivors.

In 2013, OCHTTF averaged eight new victims a month, and the average rate of identification in 2014 was six new victims a month. The task force has concluded the decrease resulted from the task force diverting focus temporarily to the development of the multijurisdictional approach to address future needs, rather than a drop in human trafficking. Evidence of the effectiveness of this transition is measurable already, although not included in the 2014 data. In July 2015 alone, OCHTTF identified 12 victims – nearly double the number of victims identified monthly over the past three years.

Since 2004, OCHTTF has assisted more than 450 victims of human trafficking originating from 36 countries. For the past three years, OCHTTF has produced the Human Trafficking Victim Report to raise awareness of this often-invisible crime and developed collaborative models to thwart its enormity.

The inaugural report in 2013 revealed that sex and labor trafficking occurs in Orange County, shattering misconceptions that modern-day human slavery did not exist within the county borders. Last year, OCHTTF’s report commended the influence of law enforcement and outlined a victim needs assessment of the types of assistance survivors typically require after exiting their human trafficking conditions.

In addition to amassing demographic analysis and contrasting metadata against previously reported statistics, the 2015 report also presents the stories of victims of human trafficking. From their perspective, they share how law enforcement and service organizations could help them access services to remove themselves from situations of human trafficking as well as build trusting relationships with law enforcement and service providers so they can heal deeply rooted wounds few of us could imagine.

“The issue of human trafficking continues to be an underground phenomenon, with many Orange County residents still discounting the fact this insidious crime occurs here,” said Ronnetta Johnson, director of Community Service Programs Victim Assistance Programs and co-chair of OCHTTF. “In addition, many survivors report feeling alone, like they are the only ones caught up in human trafficking. However, the task force does see emerging evidence that the little-known issue of human slavery in Orange County is bubbling to the surface of relevancy and discussion, and we continue to gain knowledge about how to best assist these courageous survivors.”

A Profile Emerges of Human Trafficking Victims in Orange County

This year’s report includes the 2014 Victim Demographic Analysis, which shows the total number of human trafficking survivors who received victim services in Orange County last year by Community Service Programs and The Salvation Army. Of the 145 total victims of human trafficking assisted by the OCHTTF, 69 (48 percent) new victims sought services. Of the 69 given victim assistance, 15 were foreign nationals and 54 were U.S. nationals.

Anaheim Police Leads the Development of a Multijurisdictional Task Force

With the data amassed over the past three years as well as infrastructure of law enforcement agencies and service providers built, OCHTTF is accelerating its ability to tackle the enormity of human trafficking. OCHTTF is rolling out a multijurisdictional approach to address the issue, with Anaheim Police Department leading the efforts given its substantive role since becoming a co-chair of the task force.

The multijurisdictional approach includes personnel from the California Highway Patrol, the Orange County District Attorney’s Office and the Orange County Sheriff’s Department co-located at one site to interrupt most effectively the flow of human trafficking into Orange County. OCHTTF works collaboratively with the many local law enforcement departments to provide any investigative support and technical assistance requested throughout the county.

Over the past year, Orange County law enforcement also turned its attention to how predators attract victims. Human traffickers and pimps often use social media to target, groom and recruit victims to sexually exploit them for financial gain. Through innovative proactive investigations, OCHTTF put together successful cases against three defendants who used Facebook to recruit undercover police officers they believed to be vulnerable underage girls or women.

Human Trafficking Survivors Define What They Need to Heal

To delve deeper into the breadth and depth of these needs, the task force surveyed clients of human trafficking served by Community Service Programs and The Salvation Army, the two primary victim service agencies of the OCHTTF.

“Instead of guessing what victims need and want to normalize their lives and integrate into mainstream society, the survey results tell us clearly how we can evolve victim services,” said Lita Mercado, program director of Community Service Programs for OCHTTF.

Among the survey results:

No Agency Can Do It Alone: Enter Collaboration of Faith-Based Groups

The sheer enormity of sex and labor exploitation in Orange County goes beyond the ability for one agency to stem trafficking. That’s why the task force includes law enforcement, victim service providers, nonprofit organizations, faith-based organizations and the community. These partners are critical in the process of rehabilitation and re-entry into mainstream society for victims.

In response to the high interest level and outstanding assistance provided through faith-based communities, the OCHTTF is developing and leading its first faith-based advisory council. The purpose of the council is to engage religious leaders in efforts to work in collaboration with the task force and help support the simple, everyday needs of survivors of human trafficking. The faith-based advisory council is yet another example of community organizations stepping up to stamp out human trafficking in Orange County. 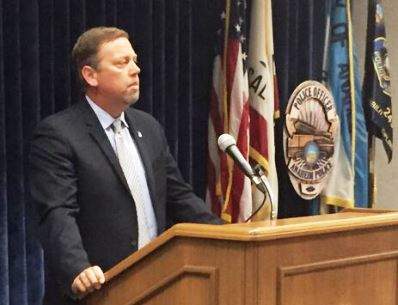 Last year, the Orange County Transportation Authority (OCTA) became a formal partner with OCHTTF. Because perpetrators and victims of human trafficking are more likely to rely on public transportation, OCTA took action by launching a campaign to increase public awareness and help victims.

This year, OCTA is increasing its efforts, launching a two-year public-awareness campaign and continuing to educate the men and women who operate OCTA buses on how to spot victims and how to get help from law enforcement.

The latest Be the One (BT1) campaign includes a one-minute video about human trafficking that will be shown on social media and YouTube and as an online public-service message on major news websites. See the video at octa.net/bt1.

Two buses fully wrapped in an anti-human trafficking message will travel the streets of Orange County, encouraging the public to “Be The One” to speak up and help a victim break free. The BT1 campaign will include information in English, Spanish and Vietnamese.

As a collaborative partner that received strong support and training, OCTA is a vital force in the public safety awareness efforts for the task force. “We’re proud to be part of a team of great organizations fighting this horrible crime and urging people to recognize the signs of human trafficking,” said OCTA Chairman Jeff Lalloway, also the Mayor Pro Tem of Irvine. “Anybody could be the one – the one with the power to change the life of a victim with the simple act of speaking up.”

The Orange County District Attorney’s Office (OCDA) is a key member of the OCHTTF. The OCDA Human Exploitation And Trafficking (HEAT) Unit was created in April 2013, and uses a tactical plan called PERP: Prosecution, to bring justice for victims of human trafficking and hold perpetrators responsible using Prop 35; Education, to provide law enforcement training to properly handle human trafficking and pandering cases; Resources from public-private partnerships to raise public awareness about human trafficking and provide assistance to the victims; and Publicity, to inform the public and send a message to human traffickers that this crime cannot be perpetrated without suffering severe consequences.

In the last three years with the task force, the OCDA has obtained 76 convictions, sending most to state prison, including two for life in state prison and only 10 convicted defendants served time in local jails or received formal probation. In 2014, the OCDA HEAT Unit filed more than 40 cases.

“We will continue to stand up for victims of human trafficking, and we will not easily be deterred,” said District Attorney Tony Rackauckas. “I hope everyone joins us to help end this egregious epidemic of modern-day slavery once and for all.”

Community Service Programs (CSP) is a nonprofit agency committed to serving children, adults and families living in Orange County who are involved with or at-risk of involvement with the justice system. CSP’s model programs assist over 111,000 community members annually, including abused children, struggling families, acting out adolescents, victims of crime, and those in need of mediation services. For more information on CSP and its programs, visit cspinc.org..

« 98.5 % of the students at the High School Inc. program at Valley High are graduating
Transition Santa Ana event set for August 30 »