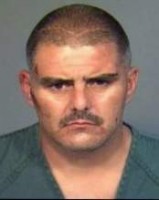 Burciaga was previously sentenced to 31 years to life in prison for the murder, on Jan. 29. He was also convicted in November of killing a rival gangbanger, Artemio Rios Jr., on Oct. 22, 1993, in front of Saddleback High School.

Back when Burciaga was arrested in September of 2010, following the police pursuit, SAPD investigators recognized him as a suspect in the Rios killing, according to the SAPD.

Burciaga’s co-defendant, Francisco Meza, was arrested in 1993 and he eventually pleaded guilty to manslaughter.