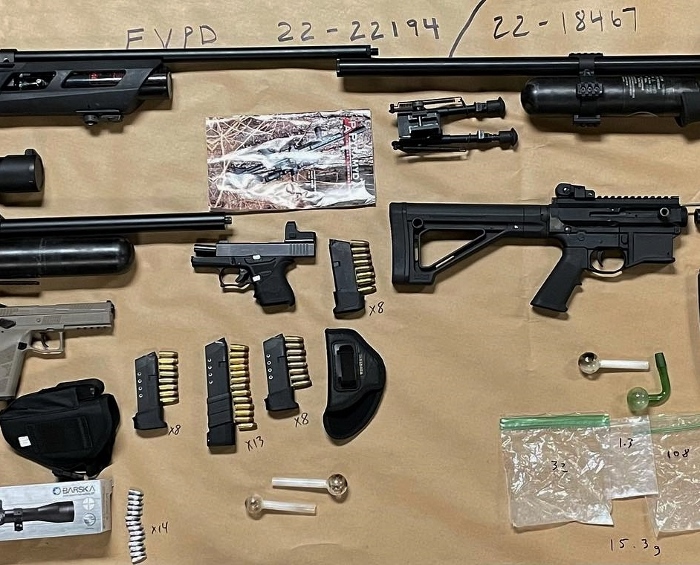 On July 1, 2022, Fountain Valley Patrol Officers responded to the 10000 block of El Plano regarding a subject shooting a high-powered pellet rifle near a public area.

Patrol Officers arrived and detained, Joseph Pham, a 42-year-old resident of Fountain Valley. A records check of Pham revealed he is a convicted felon. Pham was a recent person of interest in previous calls for service regarding shooting a high powered pellet rifle into neighboring residences.

Fountain Valley Detectives responded and took over the investigation. Later in the evening, a search warrant for Pham’s residence was executed which resulted in the seizure of one Glock 43 handgun, one AR-15 rifle, several high powered pellet rifles and handguns. Additionally, FVPD Detectives located ammunition, high capacity magazines, hunting scopes, methamphetamine, and narcotics paraphernalia (See attached photograph). The Glock handgun and AR15 assault weapon were not serialized and were determined to be “Ghost Guns”.

Pham was arrested and booked into Orange County Jail for Felon in possession of ghost guns, ammunition, high capacity magazines, methamphetamine, and narcotics paraphernalia. Additional charges of felony vandalism and shooting into an inhabited dwelling were also included. Pham’s bail was set at $25,000. Anyone with information regarding the above arrest are encouraged to contact FVPD, reference DR#22-22194.