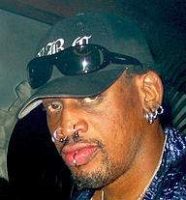 At approximately 12:30 a.m. on July 20, 2016, Rodman is accused of driving a sport utility vehicle traveling north in the southbound carpool lane on Interstate 5 near Main Street in Santa Ana. The lane bears concrete dividing walls on either side. Rodman is accused of driving head-on toward a sedan, causing the driver of the sedan to swerve and crash into a dividing wall to avoid contact with the defendant’s vehicle. The victim called 911 and California Highway Patrol (CHP) officers responded to the scene. Rodman is accused of failing to exchange information with the other driver and fleeing the scene prior to CHP’s arrival.

CHP identified Rodman during the course of their investigation. The defendant is accused of giving verbal false accounts to investigating officers.