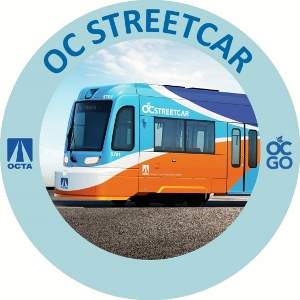 ORANGE – Construction of the OC Streetcar has reached a major milestone as construction crews have set the first rail into place that will eventually carry the streetcar vehicles through the streets of Santa Ana and Garden Grove.

The rail was set in place this month at the intersection of Santa Ana Boulevard and Bristol Street, and crews are continuing working to place rail westbound toward Raitt Street.

“This is an important and very exciting moment for this project as the public can begin to see the actual rail being set into the street for Orange County’s first modern-electric streetcar,” said OCTA Chairman Steve Jones, also the Mayor of Garden Grove. “I hope the community shares my excitement to see this project coming to fruition to provide another important public transit option.”

The OC Streetcar will run on just over 4 miles of track in each direction through Santa Ana and Garden Grove. It is scheduled to begin testing and operations in 2022.

Updates on the OC Streetcar construction and a video celebrating the streetcar rail being set into the street will be part of a Virtual Community Open House about the project scheduled for 5:30 to 6:30 p.m. on Thursday, Dec. 17.

To participate in the meeting at that time via Zoom – or to see the recorded version after – visit www.ocstreetcar.com.

The OC Streetcar route will serve Santa Ana’s thriving downtown and dense employment areas that include county and local government offices and courthouses in the Civic Center.

The streetcar will carry passengers between the busy Santa Ana transit center and a transit stop at Harbor Boulevard and Westminster Avenue in Garden Grove, running along Santa Ana Boulevard, Fourth Street and the Pacific Electric right-of-way and connecting with OCTA’s busiest bus routes.
Six vehicles – with two spares – will operate daily, making stops at 10 locations in each direction every 10 to 15 minutes. Manufacturing of the Siemens S700 streetcar vehicles began in late 2019 and are being built in northern California.

For more information on the project, visit www.ocstreetcar.com.
Attached: Artist rendering of the OC Streetcar.

About OCTA: The Orange County Transportation Authority is the county transportation planning commission, responsible for funding and implementing transit and capital projects for a balanced and sustainable transportation system that reflects the diverse travel needs of the county’s 34 cities and 3.2 million residents. With the mission of keeping Orange County moving, this includes freeways and express lanes, bus and rail transit, rideshare, commuter rail, environmental programs and active transportation.