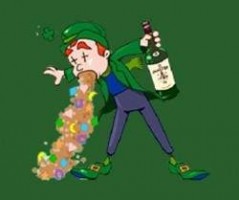 Tragically, March 17th has become one of the nation’s deadliest holidays. In fact, from 2010 to 2014, almost three-fourths of the drunk-driving fatalities during this holiday period involved drivers who were well above the .08 limit, with 266 drunk-driving fatalities nationwide, according to the National Highway Traffic Safety Administration.
The Orange County Sheriff’s Department’s DUI Task Force will be deploying extra officers on overtime targeting problem areas with high numbers of DUI collisions and DUI arrests. These DUI patrols along with routine nightly patrols will be looking for the tell-tale signs of impaired driving.

And keep an eye out for pedestrians who have had too much to drink: walking while intoxicated can also be deadly, as lack of attention could put you at risk of getting hit by a vehicle. Whether you’ve indulged a little or a lot, law enforcement wants to remind everyone that drinking and driving is a crime —you put yourself and others at risk and the consequences are often fatal.

Use this party-planning checklist to stay safe this St. Patrick’s Day:

• PARTY PREPARATION: Designate a sober, reliable driver to get you home safely. Find the name of a taxi company (or two), and keep their numbers in your phone, or download the California Office of Traffic Safety’s DDVIP (Designated Driver VIP) mobile app. that is now available for free download on iOS and Android devices. Launched in 2014, the DDVIP app. offers enhanced features, allowing users to “Map a Spot” with their current location to find DDVIP partnering establishments in their area or a “List of Spots” to search all participating bars and restaurants throughout California. Users will be offered free incentives at each bar to celebrate their life saving role. They can stay up-to-date with the latest from DDVIP and see what other users are saying via its social tab. Also through the app, for those who want to imbibe but also make it a point to plan ahead, users can easily order a sober ride from Uber, Lyft or Curb – all from one screen.

• ON ST. PATRICK’S DAY: Before you take your first sip of green beer, leave your keys at home or give them to a friend. Ensure your designated driver has committed to a sober evening. If you’re the designated driver, do not drink. Your friends are relying on you, as are the people with whom you share the road. Enjoy non-alcoholic beverages and tweet your VIP (very important party-goer) status online using the hashtag #designateddriver.

• EVERY DAY: First, commit to driving sober today, St. Patrick’s Day, and every day. Second, always keep the number of a taxi company in your phone or in your wallet so you have a backup plan if you find yourself in need of a sober driver. Last, if you’re impaired, don’t let pride get in the way of calling a sober friend or family member to get you home safely. Help spread the word about the dangers of drunk or buzzed driving, and the resources available to keep the streets safe.

• DRUG-IMPAIRED DRIVINIG: Recent statistics reveal that 30 percent of drivers in fatal crashes had one or more drugs in their systems. A study of active drivers showed more tested positive for drugs that may impair driving (14 percent) than did for alcohol (7.3 percent). Of the drugs, marijuana was most prevalent, at 7.4 percent, slightly more than alcohol. Everyone should be mindful that if you’re taking medication – whether prescription or over-the-counter – drinking even small amounts of alcohol can greatly intensify the impairment affects.
​
Remember, driving after drinking or impaired by drugs should never be an option.