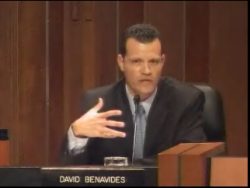 The victim sustained a gunshot wound to the lower torso, according to SAPD Police Case # 17- 08805.

This shooting happened in the Central City Neighborhood, a few blocks northwest of Martin Luther King Jr. Elementary School in Santa Ana’s Ward 4, which is represented by Councilman David Benavides.

« A bicyclist was shot and wounded this afternoon in Santa Ana
Missing Santa Ana elderly man with dementia has been found! »

4 thoughts on “Another man was shot in Councilman Benavides’ Ward midday. When will he push for more police services?”