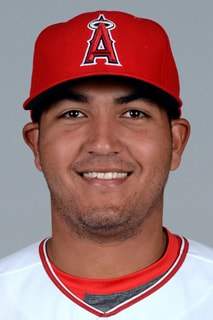 AM 830 will have Angel Tickets and other cool prizes for giveaway.

Please Note: No pictures with the player permitted and only one autograph per person. Other restrictions do apply.

The Angels acquired Perez and right-handed pitcher Nick Tropeano from the Houston Astros in exchange for catcher Hank Conger on Wednesday, November 5, 2014.

The Angels recalled Perez from Triple-A Salt Lake on May 4, 2015. Perez earned his spot on the big league club after starter Chris Iannetta’s performance began to wane. The 24-year-old Perez helped his cause by slashing .361/.418/.556 in 17 games with Triple-A Salt Lake this year.