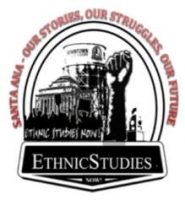 SANTA ANA, CA—Tonight students, parents, teachers, professors, and community organizations will pack the Santa Ana School Board meeting to call for Ethnic Studies classes in all Santa Ana schools from kindergarten through twelfth grade, a high school graduation requirement, the expansion of restorative practices in Ethnic Studies classes as an alternative to suspension and expulsion, and the creation of an Ethnic Studies Summer Teacher Institute where teachers can engage in pedagogy and curriculum that is culturally relevant and responsive to the Santa Ana community.

Santa Ana is rich in diversity, with cultural roots from places like Cambodia, Vietnam, Samoa, Central America, Afghanistan, and one of the largest Mexican American populations outside of Mexico, yet the majority of our students’ histories and cultures have been pushed out of the curriculum. The community is calling for a curriculum that challenges eurocentrism and reflects the diversity and linguistic legacy of the students in Santa Ana.

Oscar Martinez, a seventh grade student from Spurgeon Intermediate succinctly states “I want the School Board to make Ethnic Studies a requirement in Santa Ana because we want to know how our parents and community struggled to build our country, and we feel that if this history was included in our textbooks then students would be more motivated to learn.” The Santa Ana Ethnic Studies Coalition has linked with the statewide Ethnic Studies Now! network to create an online petition to garner support for this movement at http://www.ethnicstudiesnow.com/santaana. In two days it has already garnered over 100 online signatures.

The Board meeting will take place today, Tuesday, July 23rd, 2013, at 6 pm, at the Santa Ana School Board Room on 1601 E. Chestnut Ave., in Santa Ana, CA. Professors from local colleges, such as Chapman University, Students from universities as far reaching as UC Irvine, UC Riverside, and Cal State Los Angeles, community organizations such as RAIZ, Santa Ana Boys of Men of Color, and El Centro Cultural de Mexico, and students from local Santa Ana schools along side their parents and families will press the Santa Ana School Board to make Ethnic Studies a requirement in Santa Ana Unified schools.