Notice: Undefined variable: remote_version in /home/newsantaana/public_html/wp-content/themes/ifeaturepro5/functions.php on line 417
 New Santa Ana | Why has no one at the OC Central Men’s Jail been disciplined over the recent escape?
Santa Ana's top news & views blog 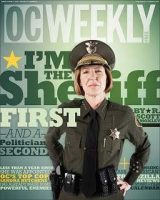 January was a bad month for O.C. Sheriff Sandra Hutchens. Not only did three inmates escape from the O.C. Central Men’s Jail – a Deputy Sheriff also left an AR-15 rifle on the trunk of his car and drove off. That weapon has still not been recovered.

Hutchens has not had much to say about the jailbreak. Here is the one-paragraph statement she released yesterday:

I have been very clear from the onset of the jail escape investigation that I am deeply concerned about the length of time it took to recognize that three maximum security inmates were unaccounted for. I have initiated an internal administrative investigation to determine the facts of what occurred, contributing factors to the escape and inmate count procedures. Until the investigation is complete, I am unable to discuss further. Please know that we have taken immediate action to ensure that this situation will not happen again, and that the safety of our community is my highest priority.

The only other thing Hutchens had to say is that there have been no personnel changes at the Jail.

How in the world have none of Hutchen’s Jail command staff been disciplined?  I understand she has to finish her investigation but at this point there should at least be a suspension or two or at the very least a new Jail director should be appointed.

I suppose by now we should be used to cops covering up for bad cops but this is ridiculous! A prison escape like this doesn’t happen unless a lot of folks were asleep at the wheel.

The escaped convicts were very violent and extremely dangerous. They escaped right into the heart of Santa Ana – yet none of the Santa Ana City Council Members have demanded an explanation and neither has First District Supervisor Andrew Do.

We should all be demanding answers.  And one paragraph empty statements from Hutchens aren’t going to cut it!

« 538 crimes were reported from Jan. 25 through today in Santa Ana
The Santa Ana Transit Terminal is now open to the homeless during bad weather »