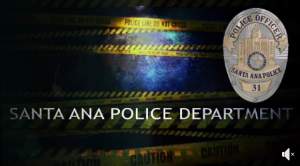 The SAPD is debuting a new video series on their social media channels, including Facebook and YouTube, called FOR THE RECORD: A Homicide Spotlight. The first segment of this series will be released on Sunday, August 30th at 10 a.m.

This series will highlight unsolved homicides and cold case investigations, in the hopes of capturing suspects with an ultimate goal of providing closure to grieving families and friends.

The first episode will feature the tragic murder of Victoria Barrios. She was shot and killed on August 30, 2019 on the 500 block of Pine Street at Hickory Street in Santa Ana.

It was just after midnight on Aug. 30 when at least one person fired on Barrios and a 17-year-old boy with her from an open back passenger-side door of a moving SUV. The teens were outside near the intersection of Pine and Hickory streets when they were hit. Police officers found Barrios with a gunshot wound to her upper torso and the male, who was badly wounded but survived. Police said they think the shooting was gang-related but neither of the teens had any gang affiliations, according to the O.C. Register.

To date the shooter remains at large.