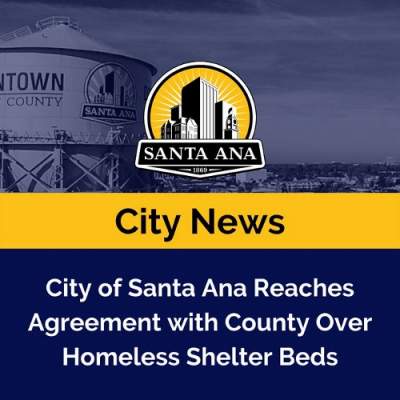 The City of Santa Ana has announced that under the guidance of U.S. District Judge David O. Carter, they have reached an agreement with the County to receive priority access to 125 beds at the County shelter on Yale Street, which is called the Yale Navigation Center.

The City of Santa Ana previously had tried to stop the County from building the Yale shelter. However the City also ended up filing a claim against the County of Orange over claims that the City of Santa Ana is disproportionately taking care of the county’s homeless population allegedly because the county is transferring unhoused people there from surrounding communities, according to the Courthouse News Service.

The County’s previous homeless shelter, the Courtyard in DTSA, closed just a few weeks after the Yale Transitional Center opened in Santa Ana, according to the Coast Reporter.

While the Yale shelter was supposed to replace the Courtyard, it had different requirements for admittance to its program. Homeless people seeking shelter at the Yale must have a State Identification card, Social security card, Medical Insurance card, Proof of income verification, Proof of vehicle registration and insurance and a TB Test.

The Yale Homeless Shelter can serve up to 425 individuals and is intended to provide shelter, meals, sanitary facilities and access to case management, employment and housing assistance, healthcare, mental health services and substance abuse treatment among other supportive services and assistance to individuals experiencing homelessness.

The Yale Transitional Center provides 24-hour security to monitor the area within a quarter-mile radius of the Transitional Center. Because the building is located within the City of Santa Ana, for any illegal activity in and around the building, and area surrounding the program, the Santa Ana Police Department is the authority responsible for law enforcement response. Neighbors may report an issue by calling the Shelter Security or by calling the Santa Ana Police Department.

The Yale Navigation Center is located at 2229 S Yale St., in Santa Ana.