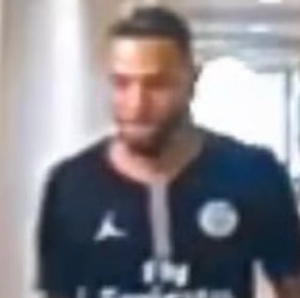 An animal abuser was caught on a security video camera inside an Anaheim apartment complex as he chased a dog down a hallway then proceeded to punch and kick the poor animal before dragging it away. Now the Anaheim Police are trying to track the suspect down.

The incident occurred at the Gateway Apartments on Thursday evening.

The Anaheim police do not yet know the suspect’s identity. He may be facing felony animal abuse charges.

The police may be getting closer to finding the suspect. They have been looking for witnesses and are gathering more video footage.

Anyone with information, including identifying information on the subject depicted in the photo is urged to call APD detectives at 714-321-3669.