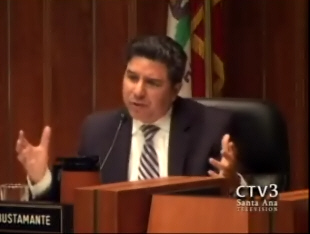 “The initial inquiry into Bustamante’s behavior was prompted by an anonymous letter to county officials received after a female employee allegedly walked in on Bustamante and another female employee having sexual relations in a conference room,” according to the Voice of OC.

Remember that Bustamante has a degree in H.R.  He knew better than to engage in such behavior in the workplace, but he did it, allegedly, anyway.

I am hearing from insiders at the City of Santa Ana and the County of Orange that Bustamante has been under investigation for a long time – perhaps as long as three months – and that it finally got to be too much for his biggest supporter, Assistant County CEO Rob Richardson, to cover up. END_OF_DOCUMENT_TOKEN_TO_BE_REPLACED