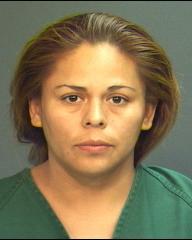 SANTA ANA – A woman will be arraigned tomorrow for having sexual relations with a relative’s 16-year-old male friend. Mayra Gonzalez, 32, Santa Ana, is being charged with six felony counts of unlawful sexual intercourse with a minor under 16 years old and two felony counts of oral copulation with a minor under 18 years old. If convicted, Gonzalez faces a maximum sentence of seven years and eight months in state prison and possible lifetime sex offender registration. She is being held on $20,000 bail and is scheduled for arraignment tomorrow, May 11, 2012, at 10:00 a.m. in Department CJ-1, Central Jail, Santa Ana. END_OF_DOCUMENT_TOKEN_TO_BE_REPLACED