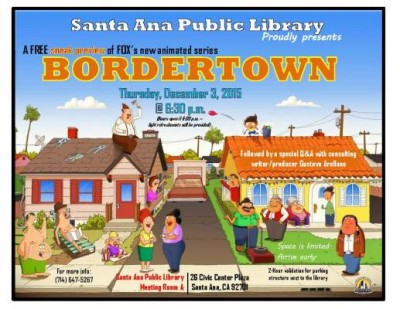 The Santa Ana Public Library will hold an exclusive sneak preview of FOX’s upcoming animated series, BORDERTOWN. From the creators of FAMILY GUY comes “an animated comedy about two families living in a Southwest desert town on the US – Mexico border. The series takes a satirical look at the cultural shifts occurring in America, where the U.S. Census forecasts that by 2017, ethnic minorities will become the majority. Set against this increasingly diverse backdrop, the comedy explores family, politics and everything in between with a cross-cultural wink” – FOX.com. END_OF_DOCUMENT_TOKEN_TO_BE_REPLACED