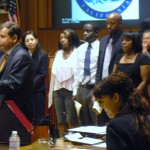 It was a very touching ceremony.

Today we received a message from Bill Cunningham, the Director of the Santa Ana Police Foundation, about Kabia’s passing:

Santa Ana Police Pride – I feel a bit more of it today.

There are a lot of dedicated police officers at the SAPD who, like Kabia, go above and beyond the call of duty.  We thank them and join them in mourning Officer Kabia.  He is gone, but not forgotten!

« Academy Mortgage Corp. and New Century Realtors celebrating the grand opening of their new Santa Ana office tonight
Congresswoman Loretta Sanchez will give away a free book at Libreria Martinez this Saturday »